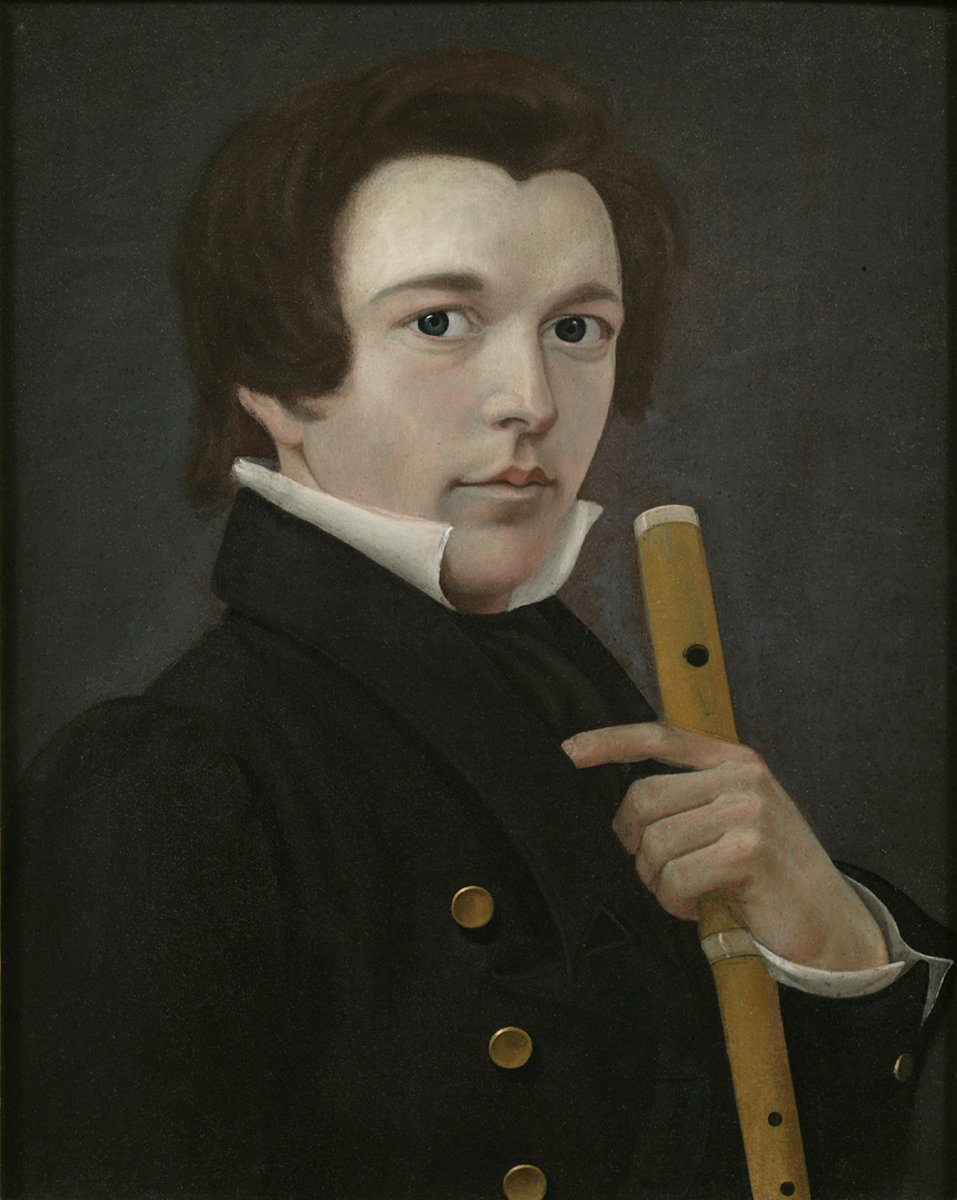 Music and art were the interconnected passions of artist William Sidney Mount’s life. Mount was one of the foremost pre-Civil War genre painters in the United States who lived in Stony Brook and Setauket, Long Island, for the majority of his life. Born into a family that loved singing, dancing, and performing music nearly as much as handling a paint brush, Mount’s preoccupation with American indigenous folk songs became both a hobby and an important artistic reservoir. His first self portrait, painted in 1828, shows the confident 21-year-old artist grasping his flute in front of a steady, purposeful gaze.[1]

Later in his life, William spent close to a decade, from 1851 until 1858, designing and refining a violin which he received a United States patent for, an instrument he called “the Cradle of Harmony.” The creation, which he also referred to as his “hollow-backed violin,” was designed to produce louder music that could be heard above the other cacophonous noise of the local country dances he often performed at. Additionally, there are many hundreds of musical arrangements and folk songs which the artist transcribed in the 1840s and 50s, which still exist today in the Long Island Museum’s archives.

One of the more interesting aspects of Mount’s musical life to consider was how it informed and worked hand-in-hand with his artistic endeavors. Although there are numerous modern neurological studies which scrutinize the beneficial connections between music and art on the human mind, Mount himself was ambivalent about this issue: on the one hand, he once wrote to his brother Robert Nelson Mount “I don’t let music interfere with my painting. I shall give my whole attention to painting.” At the same time, there are several remarks in his journal about the holistic benefits of his violin playing and its nurturing impact upon his oil canvas paintings. “I believe I must have a violin in my studio – to practice upon. To stimulate me more to painting,” he wrote in 1863, as his art career was entering its twilight. “I remember that when I painted my best pictures I played upon the violin much more than I do now.”[2]

Many of Mount’s paintings, particularly those with musical themes – from “Banjo Player” to “Dancing on the Barn Floor” — exhibit an intimate awareness of posture, technique, and musical performance, even as they evoke the vitality of pre-Civil War American folk music. One of the artist’s last paintings, “Catching the Tune”, was actually suggested to him more than 25 years earlier by his brother Robert, an itinerant folk dancer, who wrote to William:

I saw recently a scene which I think would make a good Picture. It was two musical characters. One was whistling a tune, and the other was sitting in a listening attitude with violin in hand ready to commence playing when his crony had finished his part.—The Subject no doubt is a hackneyed one, but I do not believe any one has handled it as you can.[3]

Looking for a unique contemporary musician’s perspective on Mount’s violin music, the Long Island Museum recently commissioned an accomplished professional fiddler, Chris Tedesco of Rockaway Beach, to work with us on creating a new video. Tedesco had a chance to enter the LIM archives, handle Mount’s violins and sheet music, and even draw some sound from Mount’s 1857 “Cradle of Harmony.” Afterwards, Tedesco was invited to the nearby Mount-Hawkins Homestead, the National Register of Historic Places home that Mount spent most of his life in and that LIM now is caretaker for. There, in the front parlor of the house, Chris performed one of Mount’s favorite tunes, “Rustic Reel.” Please watch and enjoy the video below.

The museum and the author would like to thank Chris Tedesco for his unique insights and talents that were critical to this project.