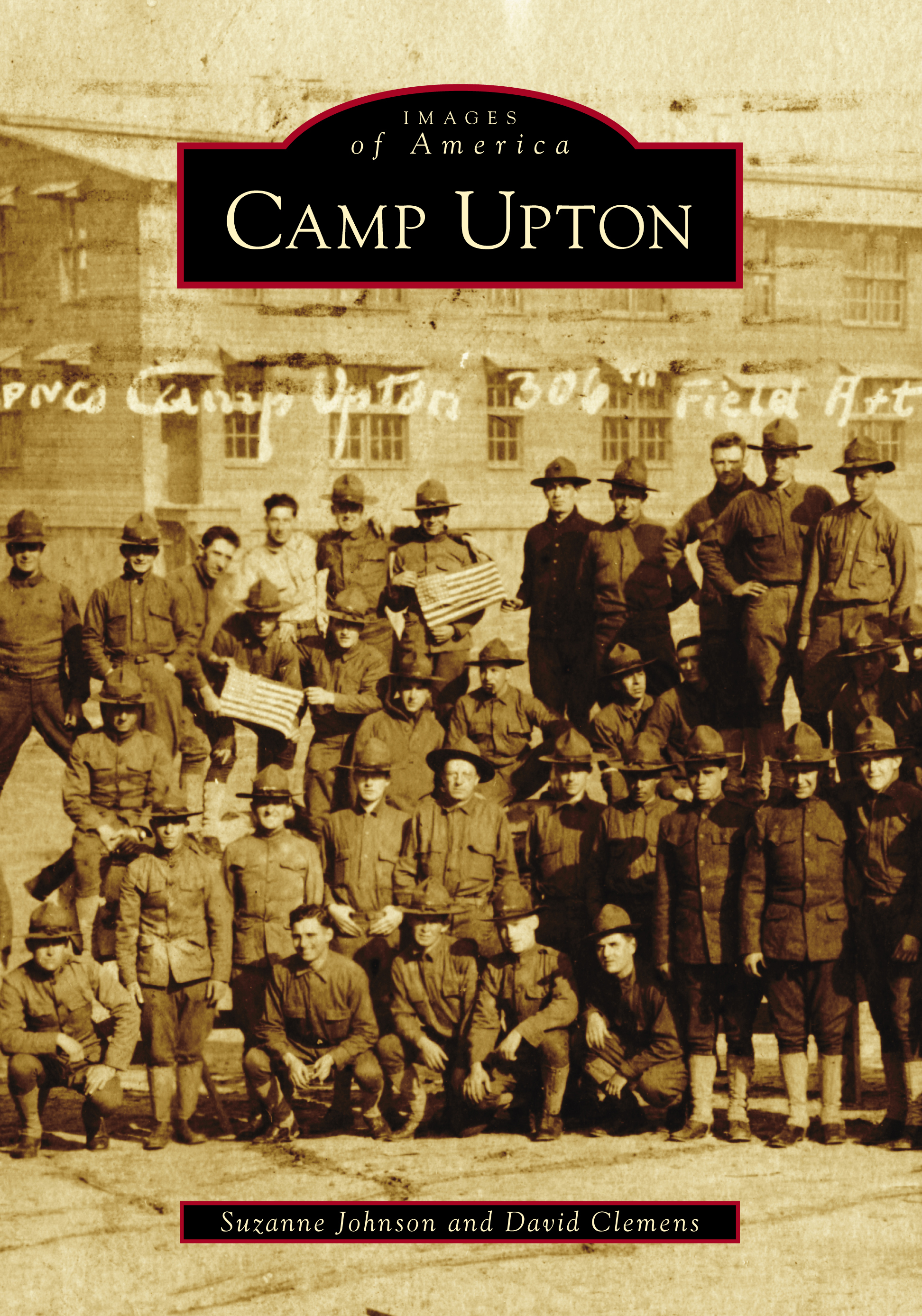 The overall story of Camp Upton in Yaphank as a soldier training facility has been known to some Long Islanders and has appeared with frequency in articles connected with the centennial of World War I.  Some also know of the site’s subsequent reappearance during World War II and its eventual establishment in 1947 as Brookhaven National Laboratory.  Camp Upton, a noteworthy addition to Arcadia’s “Images of America” series, provides a wealth of photographs, accompanying text, and an introduction tracing the role of this Long Island facility through a tumultuous time that saw the United States engage in two wars beyond its boundaries and emerge as the dominant power on the world scene. Even those well acquainted with the overall storyline are likely to discover elements of this story that are totally new to them.

Both Suzanne Johnson and David Clemens served as directors of the Longwood Public Library, an institution well known for a particularly strong local history collection, named for Thomas Bayles, who wrote a brief history of Camp Upton in 1974. Members of the Bayles family are acknowledged by the authors for providing first-hand information for this book. An impressive project initiated by two Longwood Middle School social studies teachers (Paul Infranco and Victor Massian) with their students generated a website (Longwood’s Journey) providing many primary sources about Camp Upton. The lion’s share of the images in this volume comes from the Bayles’ Collection and the images are arranged in five chapters.

Chapter 1 (“Out of the Wilderness”) examines the necessity for the rapid creation of the camp as the United States mobilized for hostilities after Congress declared war in April, 1917, responding to President Woodrow Wilson’s oft-quoted idealistic pledge to “make the world safe for democracy.”  An army was raised via the Selective Service Act. Long Island would see National Guard units trained at Camp Mills in Mineola while draftees from the New York area were to be assigned to what would become Camp Upton, taking its name from a Civil War General. Camp Upton would see 25,000 men assigned to the facility.

Why this location? The Long Island Railroad offered three nearby stations, acreage in Long Island’s Pine Barrens was available, and the climate was generally hospitable. Camp Upton was a large operation, encompassing close to 20,000 acres, extending east to the Peconic River, west to Carman’s River, north to Wading River and south to South County Road. A two-page map of Camp Upton provides a sense of the extensiveness of the facility.

Despite construction delays, Camp Upton officially opened in December, 1917.  Johnson and Clemens include photographs of the construction of the camp, the various camp facilities and the arrival of the soldiers, including a regiment of black soldiers who lived in separate barracks but shared the camp’s recreational facilities.

Chapter Two is devoted to the training soldiers received at Camp Upton, while Chapter Three focuses on daily life. The photographs document organized sports, religious services, and the presence of service organizations including the YMCA, the YWCA, and The Red Cross, at the camp. Despite a protest from white soldiers from Texas, the camp commander (Major General J. Franklin Bell) ordered that all recreational facilities be open to black and white troops.

Large group recreational events were part of the soldier’s life with music playing a significant role. An entire chapter is devoted to the most famous soldier in residence at the camp, Tin Pan Alley songwriter Irving Berlin who was drafted shortly after becoming a US citizen. Berlin was able to argue that he would best serve the military by writing musical revues rather than train for combat.  A legendary night owl, he was apparently able to swap his musical talents for not having to make reveille call. His Broadway production, Yip Yip Yaphank, using an all-soldier cast including several in drag, ran for 32 performances at Manhattan’s Century Theatre.  (Berlin wrote “God Bless America” for that show but decided it was much too heavy a song for the light-hearted review. He would eventually revisit it in 1938).

With most of this book devoted to the establishment of Camp Upton for service in World War I, the final chapter brings the story to the present. Following the Armistice in 1918, the camp became a demobilization center before it was taken down and its contents put up for sale in 1921 as described by the auction poster reproduced in the book. A brief stint as a Civilian Conservation Camp in 1933 as part of the  “New Deal” was followed by the need for the camp to be once again pressed into service in October, 1940, and rebuilt for training troops for World War II. In conjunction with that war, a photograph in the book displays the establishment of a stockade with tents as an internment facility, capable of housing seven hundred “enemy aliens”, paralleling what the federal government did on a massive scale on the west coast. On a lighter note, Irving Berlin would resurface, recycling  ‘Yip Yip Yaphank’ as ‘This Is The Army”, rehearsing the revue with three hundred soldiers at Camp Upton before taking it to Broadway and then on the road to entertain US troops.

Many of the buildings from this second incarnation of Camp Upton remained when the camp was declared government surplus property in 1946, with 5,000 of its acres used to establish Brookhaven National Laboratory the following year and the remaining acreage becoming state parkland.