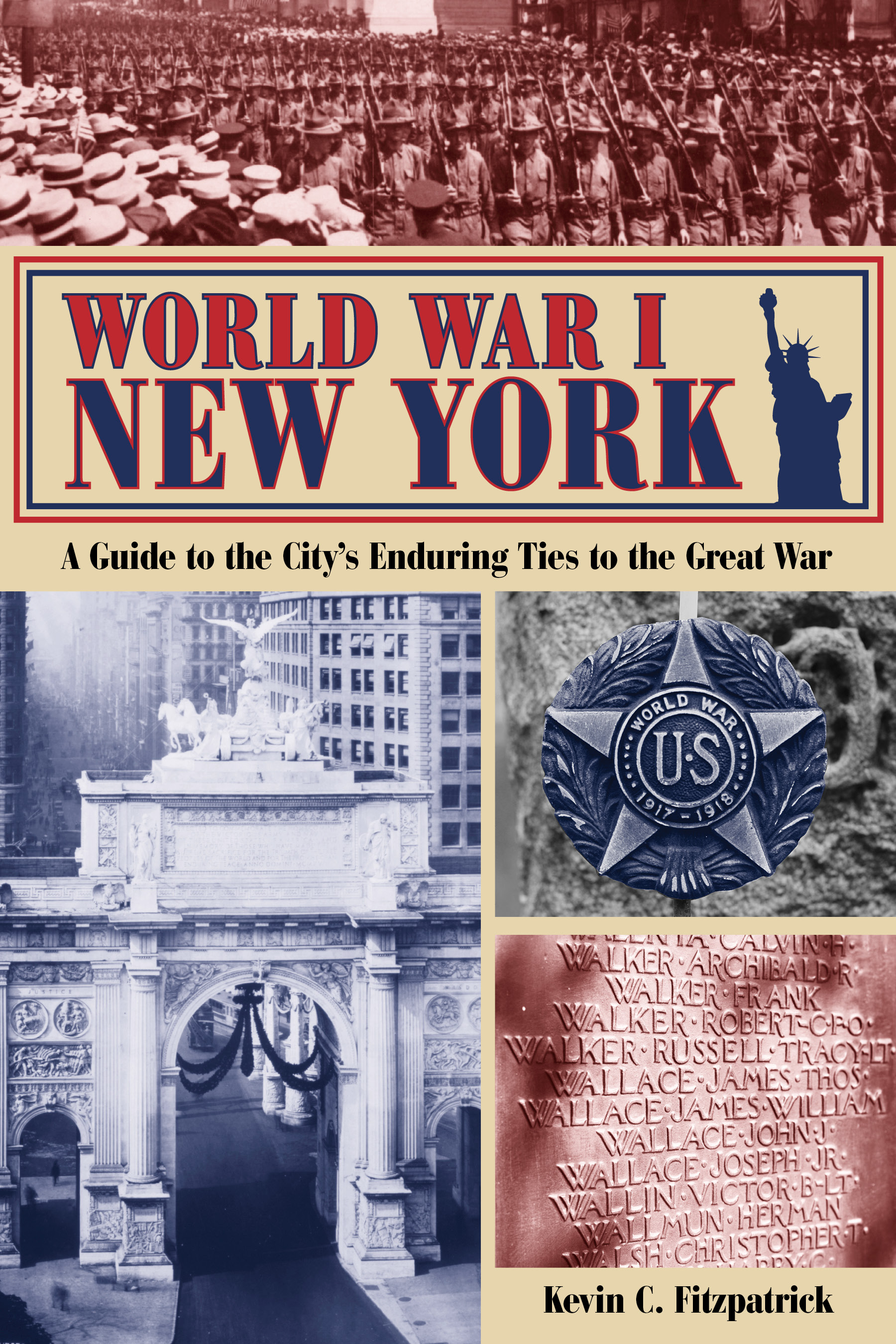 As the nation commemorated the 100th anniversary of the U.S. entry into World War I in April 1917, documentaries, exhibits and new publications broadened our current knowledge and brought a new perspective to the history of this critical time. The three-part PBS “American Experience” led the way with the excellent “The Great War.” Locally, the Suffolk County Historical Society in Riverhead mounted an exhibit entitled “Over Here, Over There, Long Island and the Great War”, curated by Richard F. Welch. As a tie-in, the Society recently held a book talk by Kevin C. Fitzpatrick, author of World War I New York.

Fitzpatrick has produced an informative guide to the hundreds of monuments that were erected in the five boroughs of New York following the war. New York Harbor was the embarkation point for thousands of soldiers and the publicity campaigns supporting the war effort were centered in New York along with celebrations and solemn tributes. The book is arranged in two parts: Part One covers the war at home, beginning with military activity on Governor’s Island and public spaces that became involved in the war effort during 1914-1918. Sites as diverse as the Hoboken Piers and Union Square, armories, theatres, parks and playgrounds are described in brief with interesting stories and photos Fitzpatrick has discovered. Two such stories concern sculptures by Augustus Lukeman: the Brooklyn War Memorial, nicknamed “the Angel of Death”, and the Victorious Doughboy of Red Hook. The former is easily viewed and revered in Prospect Park; the latter was moved and locked away after suffering frequent vandalism. Moving east, Fitzpatrick describes the wartime training camps at Camp Upton in Yaphank and Mitchel Field and Camp Mills in Garden City.

Part Two covers the Memorials and Monuments around the city and outer boroughs, including the larger cemeteries, Woodlawn and Cypress Hills National Cemetery. His profile of First Sergeant Dan Daly, a Marine who was “the most decorated in the A.E.F.” and Private John Monson, noted for his role saving the “Lost Battalion,” inspire us to learn more about these men. Both graves can be found at Cypress Hills. Maps showing the locations of most of the sites accompany each area.

Two appendices provide additional information. Appendix A lists parks, playgrounds, monuments and memorials in the five boroughs (cared for by the City of New York Department of Parks and Recreation) dedicated to the memory of service members. Appendix B is an inventory list of other Great War monuments and memorials, not in city parks and play grounds, that have been identified by the author. Most of the contemporary photos of the monuments are credited to the author, with thirty historic views coming from the Library of Congress collections.

Fitzpatrick has previously written Governor’s Island Explorer’s Guide: Adventure and History in New York Harbor, also published by Globe Pequot in 2016. He has conducted walking tours of the island since 2010 and also guides “living history” tours of Cypress Hills National Cemetery. Both books could provide much helpful information as we locate and tour the sites and mark this important centennial.