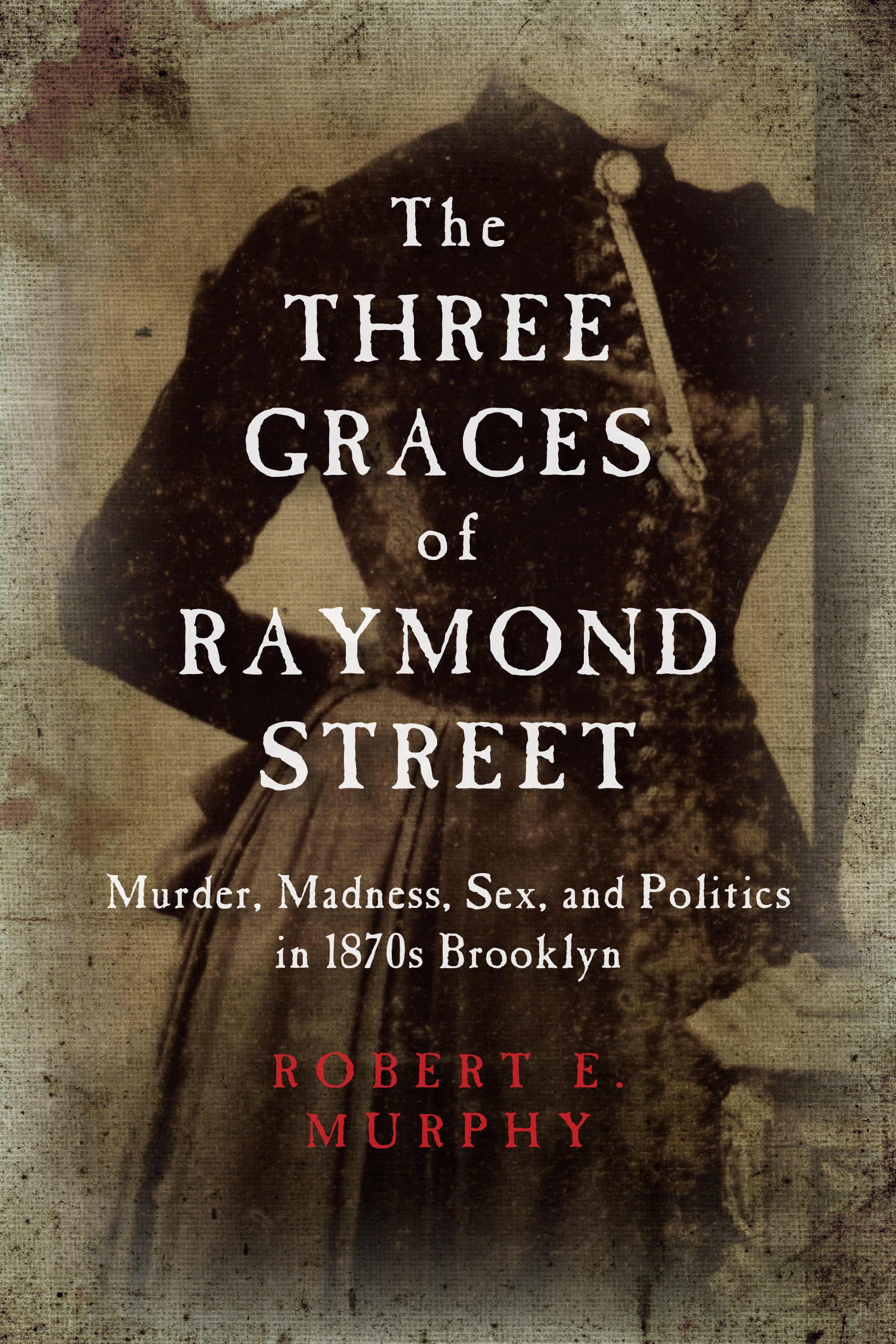 The three graces of the title are three women charged with murder who served time awaiting trial or verdict in the Brooklyn City Jail on Raymond Street in the early 1870s. Lizzie King, usually known as Kate Stoddard, one of many aliases, shot her sometime lover in his house, a case which had many complex ramifications and drama. Fanny Hyde shot her employer after she got fed up with his sexual harassment. Sarah Merrigan probably killed, though it was never proven, her best friend. Only two, Lizzie and Fanny , actually were in jail at the same time. There are three more women in a long cast of characters: There was “fourth grace”, Mary Ann Dwyer, who tried to kill her husband, a union man who refused to break a strike, and then murdered her three children because she hoped they would have a better life in heaven. Lucette Myers was a pathological liar who confused the investigation of Kate Stoddard with contradictory information; Mary Hanley was an “amateur” private detective hired by the Brooklyn Police Chief to track down Kate Stoddard.

This book tells the stories of the murders and their investigation, but is also a study of developments of the definition of legal insanity. Judges and lawyers were beginning to widen the old McNaghten rule of insanity, the ability to tell right from wrong, as medical knowledge of mental illness advanced. Medical opinion by the 1870s generally agreed that the old test was far too simple for a complex phenomenon. One newer concept was temporary insanity; another was insanity induced by menstrual complications or epilepsy. Except for Mary Ann Dwyer, whom all agreed was insane, each trial involved a defense based on some form of insanity. Lizzie King’s defense argued that she had long demonstrated signs of schizophrenia; Fanny Hyde was temporarily insane because of menstrual problems, and Sarah Merrigan was insane as a result of epilepsy. Much of Murphy’s account is about legal debates over the validity of newer forms of insanity defenses as stretched out over the trials. The jurors in Fanny’s and Lizzie cases could not reach a verdict. Fanny was eventually released on bail, but was never retried. She lived on in the shadows of Brooklyn society. Kate benefitted from an 1874 New York law that allowed committal hearings for people suspected of insanity instead of full jury trials. She was, after attorneys presented her erratic life history, committed to the asylum at Auburn, New York. Sarah Merrigan was never retried, and ended life as a school teacher.

Attitudes toward women accused of crime also figure in the dramas of the four women. Newspapers and prosecutors complained that people were too sentimental about them, sometimes seeing them as the victims of men they killed or society’s constrictions and prejudices. This factor may have influenced the all male juries.

Murphy, like many writers of historical true crime tales, places the cases in the social and political context of the city of Brooklyn in the 1870s. He is particularly concerned with newspaper coverage, focusing on the rivalry between two newspaper editors, Henry Bowen and Thomas Kinsella, Both editors, and the lawyers involved in the murder cases, were active in Republican or Democratic party politics. Henry Ward Beecher also turns up, as the murder cases were at the same time as his infamous adultery trial held in Brooklyn. These subplots contribute to the image of a city that was a busy hive of industry and politics, obsessed with murder and scandal, but it is not entirely clear how they elucidate the story of the murder cases.

Murphy writes in a lively style accessible to readers at all levels, but refreshingly, he includes thorough footnotes that lead scholars directly to his sources. The book should appeal to all interested in crime and responses to it in the past as well as the specific social history of “the lost city of Brooklyn” as Murphy styles the metropolis of Long Island.