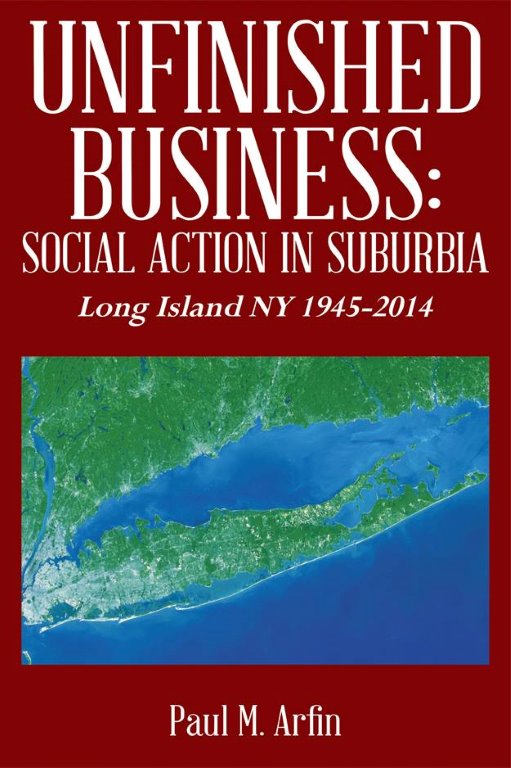 In the post-World War II era, Long Island rapidly began to evolve from a relatively rural landscape, to one which, by the latter decades of the twentieth century, came to typify the fully developed, modern American suburb. Due in large part to the liberalization of mortgage-lending practices of the preceding New Deal era, the Long Island communities of old were joined by new and expansive tract developments that brought hundreds of thousands of new residents to Nassau and Suffolk Counties in the 1940s and beyond. Bolstered by the booming postwar consumer’s economy, nearby New York City residents, as well as Americans from throughout the Northeast, uprooted their families and relocated to, what for many, were seen as new homelands that were literally being constructed from the ground up. Most famously, of course, was Abraham Levitt and Sons’ creation of what would become known as the archetypical postwar, mass-produced suburb – Levittown. With the transportation infrastructure leading to such places having already been made reality by urban planner Robert Moses and scores of others, the Long Island of the second half of the twentieth century was to become a developer’s canvas awaiting a masterpiece. As the important work of Paul M. Arfin and the myriad colleagues he encountered throughout his extensive career has proven, however, our communities on Long Island are so much more than simply homes, highways, shopping malls, and recreational vistas.

In Unfinished Business: Social Action in Suburbia, Paul Arfin has provided a necessary treatment of the landscapes of social welfare and human interaction that have been cultivated in Nassau and Suffolk Counties from the mid-twentieth century to the present. He has given readers a rich volume that covers the complementary social and community needs that inevitably arose across a diverse Long Island that eventually became home to millions of New Yorkers representing men, women and children from a variety of religious traditions, racial and ethnic backgrounds, socio-economic means, and political persuasions. As both historian and historical actor, Arfin has uniquely laid out the evolution of the various social movements and social welfare institutions that he and countless others labored within and upon as the Long Island population exponentially grew in the mid to late twentieth century. As an expansive history of the emergence of social welfare activity on Long Island, the book covers a variety of movements and issues that were of local concern in the years following World War II. This includes, among many others, civil rights, poverty, criminal justice reform, disability services, mental health programs, education reform, and, family and youth services. It also includes coverage of the contributions of various charitable organizations and social action groups that came to fruition on Long Island in the postwar period. This includes, among others, the League of Women Voters, the Long Island Progressive Coalition, the Health and Welfare Council of Long Island, the United Way of Long Island, the Suffolk Community Council, Inc, The Long Island Community Foundation, and, the United Way of Long Island. At the same time, Arfin’s treatment also includes personal profiles of the central figures and influential members of these organizations, which offers a vital “who’s who” within Long Island’s past and present world of social welfare and social justice. For those interested in local and regional history, community organizing, and the exponential growth in public and non-profit social outreach programs, Arfin’s book is a must read, interdisciplinary text.

Structurally, the piece is broken into six parts, with the bulk of the chronological history laid out in the second. Spanning the period from 1945 to 1985, Part II of Arfin’s piece is comprised of eight individual chapters, all of which cover a four to five year period in the evolution of social welfare and community action on Long Island. In each of these eight chapters, that cover approximately two hundred of the over six hundred pages in the book, readers are treated to a historical overview of the four to five year period under examination, followed by local demographic analyses, as well as the author’s personal reflections on the era under examination. In addition, each of these eight chapters also include several, primary source outtakes from relevant local newspaper articles which are intended to fit the author’s year by year coverage of social change on Long Island into the larger, regional contexts within which they occurred. Due to this arrangement, Arfin’s piece can be viewed by the reader as several things at once: a personal memoir, a local history, a social and political analysis, a reference guide, a social welfare text, or just an all around interesting read. In addition to the eight chapters of detailed, chronological history, the remainder of the book includes photographs of major players in the field, profiles of community leaders, significant changes in program and policy from the mid-1980s onward, the local Civil Rights Movement, the reflections and the recommendations of interviewees, as well as the author’s thoughts on the future of social activism, non-profit involvement, and public policy as unfinished business on Long Island. With Arfin’s book as a testament to all that has been accomplished in the past sixty years, the future of social engagement and the resurgence of social capital on Long Island is bright with promise. Thanks to the work undertaken by those who are highlighted in the book, current and future generations of Long Islanders will benefit from institutions, programs and policies for which the island’s first eastward migrants could have only hoped and dreamed.