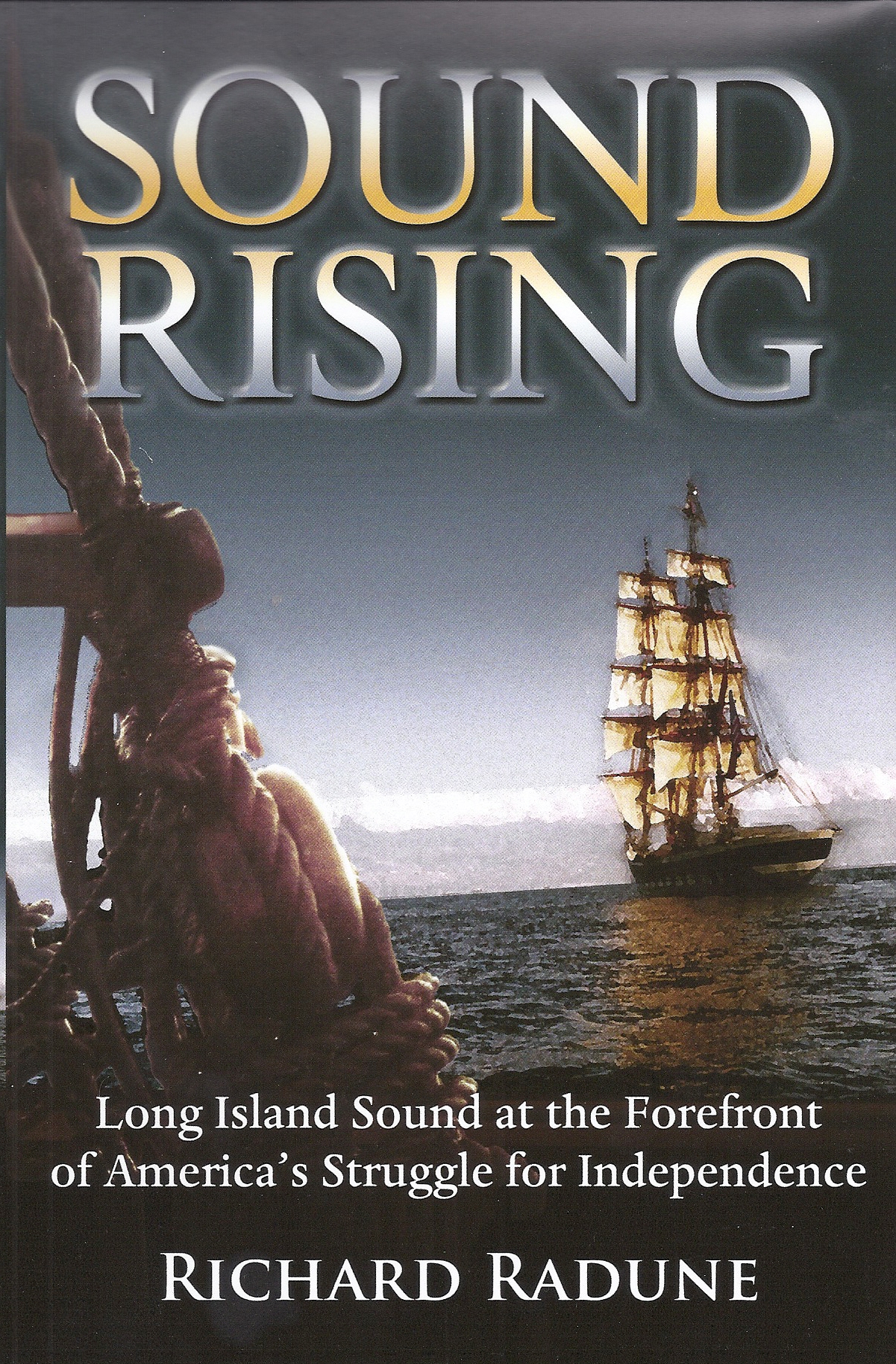 Sound Rising puts many of the reasons for the American Revolution into the context of maritime trade and brings to light the significant contributions to the war effort of the ships and crews that inhabited Long Island Sound’s rivers, harbors and inlets . One of the book’s themes is the importance of Long Island Sound to America’s commerce and trade. From the West Indies to Nova Scotia, ships built in Connecticut shipyards brought sugar, molasses, rum and salt to New England and Long Island Sound ports and returned with salted cod, livestock, dairy products, lumber and more. From the beginning, Long Island Sound ships found many ways to avoid the tariffs imposed by Great Britain. The many coves and inlets along the Sound provided safe harbors where customs duties could be avoided and later, during the Revolutionary War, the increased presence of British warships and Loyalist privateers.

In Part 1, Chapters 1-4, Sound Rising moves from the 1600s to the years before the Revolutionary War. In Part 2, Chapter 5 moves the story between Nova Scotia, Boston, New York City and Long Island Sound in the first two years of the war and sets the stage for the action to follow.  Chapter 6 establishes a number of the connections between Long Island and Connecticut and details the operation of the Culper Spy Ring that operated from 1778 to 1783 between New York City and Setauket and then across Long Island Sound to Connecticut and on to Washington’s headquarters in upstate New York and New Jersey.

Chapters 7, 8 and 9 detail the actions of both American and British forces on both sides of the Sound. The number of actions taking place and Radune’s attempt to tell all the significant stories requires repeating facts in a number of accounts and in places it becomes difficult to put events into a chronological context. This is especially true of the years 1777 through 1779 when Long Island Sound became a battleground. Connecticut and Continental Naval vessels, British warships, and privateers from both sides operated in the Sound as well as up and down the Atlantic from Nova Scotia to the West Indies. The goal of American shipping was free commerce and profit, but the goal for both sides during the two wars was to harass and destroy the effectiveness of the enemy and to keep the armies supplied with food, clothing and war materials.

We hear and read so much about the Revolutionary War from the standpoint of the British and Continental Armies, but little about the ships of commerce, privateers and both State and Continental Navies that contributed to the Patriot cause by capturing men and supplies destined for the British Army. Sound Rising sets this record straight and in the process delights us with the moving stories of the people on both sides of Long Island Sound who risked their lives to assist in the war effort and at the same time to protect their homes, families and communities. Radune describes how Long Island Sound people made a difference and persuasively details how the Sound contributed to the eventual American victory.

In telling this engaging story, Radune accomplishes what is missing in many books. Sound Rising is first and foremost local history, but it significantly places the ordinary and often overlooked people of Connecticut and Long Island into the context of national and world history. “By the mid 1700s, the maritime power of Long Island Sound was poised to make an impact on the world stage” (p.5). The book also greatly contributes to our knowledge about the close relationship of Long Island and Connecticut during this time period.

In August 1776, Long Island Sound ships assisted the Continental Army as the British Army and Navy attacked and defeated General Washington’s Army. These ships and boats helped make the difference between capture and evacuation to Manhattan. Following Washington’s defeat, many Connecticut ships and whaleboats made multiple trips to Long Island to bring Patriot refugees to Connecticut. Long Island, essentially an agrarian settlement area, is treated as worthy of consideration by Radune. Although Long Island’s harbors, bays and inlets did not emerge with any maritime economic power until after the war of 1812, Sound Rising credits Long Island with a significant role in the Revolutionary War. Under British control from 1776 to 1783, Long Island became a hotbed of both Patriot and Loyalist activity.

Commerce continued to drive the maritime industry after the war of 1812. Sealing, whaling and the China trade took ships from Atlantic ports, as well as a few from Long Island, Connecticut and Rhode Island ports to the South Atlantic and the vast Pacific Ocean. Shipbuilding and maritime commerce grew up and down the Atlantic coast. Long Island Sound and Connecticut shipbuilding decreased in importance as ships were being built and operated, many by Connecticut and Long Island families, from major ports such as New York. Long Island Sound continued to produce many sloops, schooners and ships of various tonnage used, for the most part, as coastal vessels carrying cordwood, coal and produce. These were the trucks of their day.

Sound Rising by Richard Radune brings historic Long Island Sound, Connecticut and Long Island to life and introduce readers to the men, women and families who suffered through tariffs on imports, burning of homes and towns, capture and imprisonment, shipwrecks, impressments, and finally victory, recovery and expansion of trade and commerce.