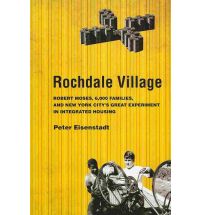 The title of Peter Eisenstadt’s new history, Rochdale Village: Robert Moses, 6,000 Families, and New York City’s Great Experiment in Integrated Housing (Cornell University Press, 2010), gives scope of the book’s ambition.  Eisenstadt provides an important evaluation of Robert Moses’s racial attitudes at the end of his career, and a detailed survey of Abraham E. Kazan’s massive contribution to housing development in New York City. These elements, rich as they are, serve as context for the work’s larger concern – to understand how a racially integrated community emerged in the 1960s at Rochdale Village, and why this experiment in integration failed.

Rochdale Village, built on the old Jamaica Racetrack in southeast Queens, comprises twenty fourteen-story buildings, 5,860 apartments and over 25,000 residents. Located within predominately-black South Jamaica, Rochdale Village was consciously conceived by its developer, Abraham E. Kazan, as a racially integrated community.  The name Rochdale commemorates not only the social idealism of the “twenty-eight weavers and . . . artisans whose cooperative store” in Rochdale (England) “inaugurated the modern cooperative movement” (6), but also Abraham Kazan’s own radical roots.  Kazan built workers’ cooperatives because he believed they offered promise for a new “form of economic organization . . . [one from] which the profit motive had been eliminated” (6). From the 1920s to the 1970s, first through the Amalgamated Clothing Workers of America, then through his own company, the United Housing Foundation (UHF), Kazan built limited-equity cooperatives across New York City. Prior to Rochdale, however, the UHF’s commitment to integration was found more in its rhetoric than its actions.  In Rochdale Village, Kazan recognized the opportunity to prove that UHF cooperatives could be “an important part of the solution to the nation’s racial crisis” (12).

Utopian ideals, however, don’t build houses. Kazan himself acknowledges that “Rochdale Village owes its existence to Robert Moses” (33).  Pressure from Moses pushed Governor Nelson Rockefeller to secure state support for most of the project.  But Eisenstadt intends more than a discussion of the politics behind Rochdale’s construction.  He wants to understand why Moses, who consistently opposed anti-discrimination initiatives, helped Kazan build an integrated community in South Jamaica. Moses, Eisenstadt tells us, was a gradualist on issues of race and opposed to state-imposed solutions to social problems.  For Moses, integration would only work when it was “freely entered into by all party, uncoerced, unmonitored and unregulated” (80-81). This was consistent with the UHF’s approach at Rochdale.  Eisenstadt further argues that Rochdale came to represent more to Moses than simply “a tactical adjustment to . . . shifting racial discourse.”  It became Moses’ “vindication, proof that he was not indifferent or insensitive to the plight of racial minorities . . .”  (81).

In 1965, when the last families moved into Rochdale, its 25,000 residents were roughly 80% white and 20% black.  The white population was largely Jewish, left-leaning in its politics.  In a 1966 New York Times Magazine article, the radical journalist, Harvey Swados, reviewing the development suggested that “it would be a grave mistake to assume that white families moved to Rochdale ‘from conviction, eager to put their liberal, all-men-are-brothers beliefs to the test’” (14).  For most residents, white and black, Rochdale’s attraction was its affordable apartments.  Integration was the side effect of a practical economic consideration.

Eisenstadt identifies three interrelated causes for the failure of integration at Rochdale:  rising crime, failing schools, and a larger social shift away from integration as a value. Crime rates doubled or tripled each decade citywide from the 1960s through the early 1990s.  Rochdale was not exempt from this trend. Statistics drawn from 1972 suggest that one family in ten may have suffered a criminal encounter at Rochdale – from rape to auto theft to malicious mischief.  Crime created an atmosphere of fear, and fostered a sense that “Rochdale was ‘becoming a ghetto’” (217). The most important factor, however, was failing schools, and the watershed moment in this decline was the teachers’ strikes of 1968.  “After the . . . strike integration was more or less stopped in its tracks . . . .  Within a few years, white families started to leave [Rochdale] in large numbers” (192). The strike occurred in the context of the New York City Board of Education’s efforts to address school segregation by empowering local school boards.  The United Federation of Teachers (UFT) challenged the right of the unit administrator for the Ocean Hill-Brownsville School District to disregard “existing eligibility lists (on which 99 percent of the candidates were white)” and select black principals for schools in black communities (194). The teachers’ strike exacerbated already high racial tensions and split the Rochdale community along racial lines. The “dichotomous identity politics” that emerged from the strike was violently expressed in the schools, most especially at Intermediate School 72 on the Rochdale grounds. The “one problem [we] cannot accept is a poor school situation,” concerned parents wrote to the chancellor.  “Parents sacrifice many things in order to provide what they feel is a good education.  This above all is what is causing many white and middle class families to move out of this community” (213). The most troubling long-term effect of the racial violence of the late 1960s, however, was a larger ideological shift away from integration.  The racial turmoil of the 1960s led “many, black and white,” to conclude that “the safest path to better . . . race relations was to keep blacks and whites as separate as possible” (221).

Through his study of Rochdale Village, Peter Eisenstadt offers a carefully researched, insightful examination of New York’s race relations in the 1960s and 1970s. That integration at Rochdale could not withstand the charged racial climate of the 1960s does not, he suggests, negate its developers’ idealistic belief that New York’s race problems might be solved if the races could simply live side-by-side.  More importantly, he suggests that the insights gained from Rochdale could well inform efforts to address the continuing problem of segregation in New York and the nation.  Rochdale Village weathered other storms, the fiscal crisis, a brutal Teamsters strike, and remains today a limited-equity cooperative with a stable middle-class, ninety-eight percent black population.