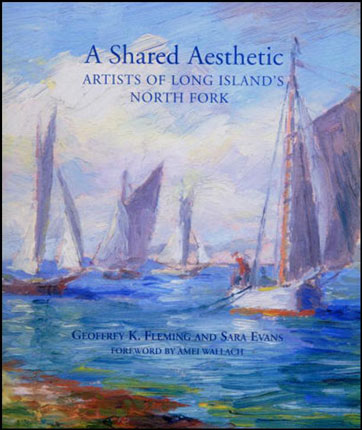 According to Fleming, the director of the Southold Historical Society and the lead author of this authoritative, gracefully written and beautifully illustrated survey, credit for the book belongs to his collaborator, the writer and editor Sara Evans, who suggested the project some five years before it came to fruition. I’d like to think that she was aware of my own book, Hamptons Bohemia: Two Centuries of Artists and Writers on the Beach (co-authored with Constance Ayers Denne and published in 2002), and decided that the North Fork deserved similar treatment. The two books share some characteristics, not least the recognition of the social, cultural and economic context in which artists operate. However attractive the locale, they don’t congregate in an area merely for the scenery.

The book opens with a fast-paced summary of the art colony phenomenon by Amei Wallach, a former Newsday art critic and Mattituck resident. She contrasts the area with the more celebrated (and celebritied) South Fork, with its two art museums and numerous commercial galleries, noting that the North Fork traditionally attracted a more conservative, academically oriented contingent who preferred to stay out of the social limelight. Wallach also provides a glimpse of how the North Fork art scene has shifted in the late twentieth and early twenty-first centuries, a time period that the book as a whole does not address. The authors set 1969 as the cutoff year. “We did this for several reasons,” Fleming writes, “not least of which was the sheer number of artists who have continued to discover the North Fork since that time.”(10)

Another reason, I suspect, is that the majority of the works illustrated and discussed belong to the Southold Historical Society and the Oysterponds Historical Society in nearby Orient, neither of which collect contemporary art. They do own fine examples by respected historical figures, ranging from the early 19th century limners Abraham G.D. Tuthill (an Oysterponds native), Sag Harbor’s Orlando Hand Bears, and William Hillier, who came from New York City to paint a marvelous portrait of Cynthia Tuthill, one of the “Tiny Tuthills,” a renowned local family of little people, to the members of the Peconic Art Colony in its heyday, from the 1880s through the 1920s. They also own paintings and drawings by their students, as well as talented (and not so talented) amateurs, which are historically but not artistically significant. Leaving out a few of them could have made room for some of the internationally renowned contemporary artists who make the North Fork their seasonal or full-time home.

This reservation aside, the works that are included, as well as the many period photographs and documents, effectively illuminate the story. Color and monochrome plates are interspersed with the narrative, a layout that makes for a fluid relationship of text and images. Following an introductory chapter dealing with art activity before the arrival of the Peconic colonists, Fleming focuses on Benjamin R. Fitz, an artist with local roots who trained at the National Academy and in Munich, Germany, where he befriended fellow student Edward A. Bell. After his return from Europe, Fitz often visited his family in Peconic, and encouraged Bell and other colleagues to summer in the neighborhood. Among those who did were Edward Moran (brother of Thomas, who had settled in East Hampton), Henry and Edith Prellwitz, and Lemuel M. Wiles, who in 1895, with his son Irving, ran the North Fork’s first summer school of art, modeled on William Merritt Chase’s outdoor art classes at Shinnecock. Although the school lasted only one season, it signaled the existence of a community of resident plein-air painters who attracted others as seasonal guests and students. The book mentions work by occasional visitors such as Charles H. Miller, Gifford and Reynolds Beal, and Paul Cornoyer, but illustrates few examples.

After a thorough discussion of the art colony’s prime years, there’s a chapter on the semi-professional and amateur painters, whether local or “from away,” who upheld the representational landscape and portrait traditions—the shared aesthetic of the book’s title—well into the twentieth century; and one on the so-called “twilight years” of the mid 1960s when, as Evans writes: “Many [North Fork] artists, both home-grown and academic, felt themselves to be increasingly irrelevant, eclipsed and marginalized.” (164) There’s a nod to the modernists who came in the 1950s and ’60s, represented by Betty Parsons and Theodoros Stamos, whose studios were designed by the architect-cum-sculptor Tony Smith, as well as Stamos’ assistant Ralph Humphrey and his frequent visitor Mark Rothko, but for the most part the abstract painters and sculptors belong to a sequel volume that would take the story up to the present.

Wendy Prellwitz, an architect and the great-granddaughter of Henry and Edith, contributes a fascinating chapter on artists’ studios in New York City and on the North and South Forks. James Grathwohl, the current president of the Old House Society in Cutchogue, writes on the art activities around the Southold Tercentenary celebrations in 1940, and Norman Wamback, a North Fork native and curator of the Mattituck-Laurel Historical Society, has compiled a delightful selection of “entertaining stories” by and about some of the art colony denizens. Finishing with a lengthy (although admittedly not comprehensive) listing of artists’ biographies, and an extensive bibliography and endnotes that acknowledge the research of other art historians and scholars, the book brings together a prodigious amount of material and does justice to the history of a vital but lesser-known eastern Long Island art community.