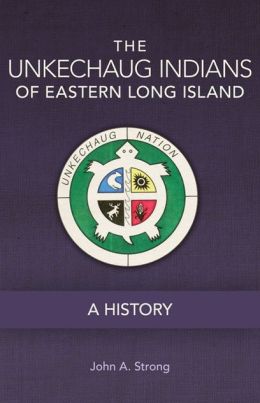 John Strong might be called the dean of Long Island Indian studies.  Over the course of his career, he has produced several excellent histories of Long Island Indians, especially the Montauketts and Shinnecocks.  His work is characterized by its painstaking research into local archives, careful placement of events on Long Island in the context of the mainland, broad chronological view, and sensitivity to the contemporary politics of Native communities.  His latest book on the Unkechaugs (also known as Poospatucks) is no exception.

Indeed, in some ways it represents Strong’s greatest achievement insofar as it brings to light the history of a group that is little known and that many historians would wrongly assume is unknowable.  This book reads something like a court briefing or a tribal petition for federal recognition because that is how it began;  in 2009 Strong was an expert witness in a federal case involving the Unkechaugs’ sovereign immunity. Addressing the concerns of the court, this book argues that the Unkechaugs have been a community on eastern Long Island since time out of mind, and that they have maintained an ethnic and political identity throughout their people’s many changes. Strong bases his conclusions on a solid platform of often difficult documentary sources:  Indian-authored or dictated petitions, court cases, town meeting minutes, land deeds, government committee reports, traveler’s accounts, newspapers, and more.

He also draws on archaeological site reports and a rich body of oral histories.  He seems to have left no stone unturned.  The result is a convincing case that the Unkechaugs have been and still are a people and, furthermore, that their resilience and creativity bodes well for their future.  In its broad outlines, the Unkechaugs’ history unfolds along the same lines as the histories of nearby Indian peoples on Long Island and southern New England.  The Unkechaugs initially saw English colonists as trade partners and military allies against the raids of the Narragansetts and sold them land to consolidate those relationships.  Once the English secured a foothold on Long Island, the Unkechaugs and their indigenous neighbors began to suffer a barrage of crises:  outbreaks of epidemic disease, trespass by colonial livestock, English encroachment on their land, loss of their subsistence resources, debt peonage, and indentured servitude, particularly in the context of the whaling industry.  This pattern of dispossession and exploitation became all the more sinister in the late eighteenth and nineteenth centuries as the white majority began to deny that the Unkechaugs were Indians at all, usually pointing to their marriages with outsiders, particularly African Americans.  From that point forward, the Unkechaugs repeatedly had to prove who they were to skeptical white outsiders conditioned to believe that Indians could only disappear not adapt.

Against the backdrop of this familiar story are the fascinating particulars of the Unkechaug case.  For instance, Strong argues that some Unkechaug land sales took place less in the context of coercion than as part of an Unkechaug strategy to establish rich whites nearby who could provide employment and even political advocacy.  Indeed, the Unkechaugs cessions to Tangier Smith not only led to the Smith manor on which many Unkechaugs earned their livelihoods, but convinced Smith in 1700 to grant the Unkechaugs land in perpetuity on Mastic Neck that still serves as their reservation.  The Unkechaugs appear to have had similar advantages in mind when they granted land to the Floyd family in the early eighteenth century. In the subsequent centuries, the Unkechaugs volunteered more than their fair share of men in each of the country’s wars and engaged in more than their fair share of battles against white interests that threatened their reservation school, reservation lands, and, more recently, their right to run tax-free reservation smoke shops. Some of those battles continue to this very day.  As Strong is at pains to emphasize, the Unkechaugs were and are active, creative agents in shaping their own history, even under straightened circumstances.

Strong closes with a spirited discussion of the various ways in which the contemporary Unkechaugs are pursuing their political and cultural independence, which he sees as part of a centuries-long tradition. It is hard to disagree.  Making the most out of sparse sources, Strong makes a powerful case that generations of Unkechaug men and women refused to bow to the demands of white outsiders that they cease to exist.  His careful mining of local archives and genealogical research enables him to infuse this group history with the captivating stories of individuals, such as the seventeenth-century sachem Tobacus, the nineteenth-century matriach Dolly Cuffee, and the Depression-era chief Horace Ward. Strong has given anyone with an interest in Long Island history, including, I imagine, the Unkechaugs themselves, an invaluable resource.