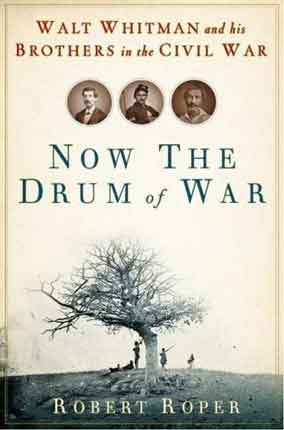 Much has been written about Walt Whitman, the iconic American poet and native Long Islander. You might think the topic would be thoroughly exhausted by now. But authors still explore new aspects of Whitman’s poetry and life. In Now the Drum of War, Robert Roper becomes part psychoanalyst, part historian as he gives us the most personal reconstruction of the Whitman family of the 19th century yet written. Roper focuses on the 1840s through the 1880s, when the Whitman family was dynamic and interactive. He organizes his book in a topical yet not strictly chronological manner (a small quibble to mention here – no chapter titles). There are three main characters in his narrative: George Washington Whitman, Louisa Van Velsor Whitman and, of course, Walt himself. Although other family members are given space, Roper primarily relies on the correspondence of these three to tell the story. Using quotations from their letters and those of other witnesses, he brings forth and interprets the feelings and motivations behind their words. He succeeds in making the reader feel their nervous anticipation of what is about to become of them. He evokes the moment when their present is about to become their past and lets them describe and evaluate it.

Roper begins the book with Sergeant Major George Washington Whitman, one of the poet’s younger brothers, on September 14, 1862, at the Battle of South Mountain, Maryland. George’s 51st New York Regiment was pinned down there by Confederate forces, losing 150 men in 45 minutes. Two days later, he was at Antietam for the bloodiest 24 hours in American history: 23,000 dead and wounded lay upon the fields there, four times as many as Normandy’s beaches after D-Day. At Burnsides Bridge, George was in the forefront of the charge across the bridge and up the escarpment to the Southern positions. Nearly everyone from the 51st with him was wounded or killed. One fellow combatant, Colonel Charles W. Le Gendre, lost an eye and part of his jaw, but lived to fight on, disfigured. George walked purposely through these and other perilous actions without being touched in battle, despite some near misses. At Spotsylvania, his canteen was shot away. He wrote letters to his mother Louisa, to Walt, and the rest of the family, in a positive matter-of-fact way.

Walt and his mother became upset reading newspapers about what George had been through, but not by his letters. George Whitman led his men through sixteen major battles, from Antietam to the Wilderness and Petersburg. He fought from Virginia to Tennessee and back. He nearly died at Danville Confederate prison of poor health and starvation. Walt and friends did all they could to have him exchanged. Prisoner exchanges were stopped because the South would not repatriate Union black soldiers and Lincoln would not give in. When George had finally gained his freedom and was recovering in Brooklyn, Lee had surrendered at Appomattox and President Lincoln had been murdered. George started in the army as a volunteer sergeant, but retired a lieutenant colonel, by brevet rank.

Roper next goes back in time to the saga of the Whitman family. Walter Whitman, Sr., was a house builder. He married Louisa in 1816 and built a house that became his famous son’s historic birthplace in South Huntington. The family soon left for Brooklyn, an expanding city, and the father took them from house to house which he and his sons built, lived in, and sold. All told, the Whitmans lived in 16 different places in Brooklyn. There were eight children: Jessie, Walt, Jr., Mary Elizabeth, Hannah Louise, Andrew Jackson, George Washington, Thomas Jefferson, and Edward.

The family was impacted by numerous tragedies and complications. Jessie, a sailor, fell from a mast and suffered brain damage and Andrew died from a throat infection. Walt and George became involved with the war. Roper clarifies the critical role Louisa Van Velsor Whitman was forced to play over time. Possibly before, and certainly after 1855, the year her husband died, Louisa was, not financially but certainly emotionally, the person who held the family together.

Roper next explores the evolution of Walt. 1854 marked significant changes for the budding poet, as he was assembling Leaves of Grass. Walt took off his stylish hat, suit coat, and bowtie, shown in his 1848 New Orleans portrait, and had himself photographed as a tradesman carpenter in an open collar shirt and sun hat. This picture was lithographed for the frontispiece of his first edition of Leaves, in 1855. Whitman lost interest in being a desk job editor and continued carpentry and freelance writing until 1862.

Roper observes the way Whitman’s poetry became more earthy and sensuous, such as in the following offering from Leaves of Grass:

It is for the wicked just the same as the righteous … I make
appointments with all,

I will not have a single person slighted or left away,

The keptwoman and sponger and thief are hereby invited …

Roper explores Whitman’s liaisons with men. His notebooks contained lists of men with remarks such as “slept with him.” Some lines of the Calamus poems included in the 1855 edition of Leaves announced his feelings for other men. He was one of the first persons in America to champion same-sex love and is still an icon for America’s gay and lesbian communities. Leaves was condemned for its explicit heterosexual content, but not for its homoeroticism, largely overlooked at the time because emotional involvement between men was viewed as normal.

Walt’s involvement in the Civil War began on December 16, 1862, when he and his mother found George’s name on a newspaper casualty list. Three days later, Walt arrived at Fredericksburg, Virginia, to find George alive and in good spirits. At one of the first sites he visited, Walt noticed a pile of severed legs and arms. He was shocked at the misery of the wounded lying in the cold weather. Walt returned to Washington, obtained lodging and a civil service job, and began visiting and caring for the wounded in the hospitals. He made over 600 visits to the lingering wounded, those suffering from infections and amputations, until after 1865. He brought refreshments and presents. He wrote letters for the young men and wrote to them while away in New York. Whitman’s poetic response towards the end of the war was a thin book called Drum Taps that carried a visceral realism to it that no other war poetry had:

Look down, fair moon, and bathe this scene;

On the dead, on their backs, with their arms toss’d wide,

In April of 1865, Walt had to stop publication of Drum Taps because the war had ended and President Lincoln was assassinated. He had no statement for President Lincoln to continue the book. Walt added the Sequel To Drum Taps that November. This effort contained “When Lilacs Last in the Dooryard Bloomed,” to which Roper devotes space, dwelling on its mysticism. Roper oddly makes no mention of “O’ Captain My Captain,” from Drum Taps.

The Washington hospitals closed as the casualties died or returned home. Walt remained in the capital until 1872, when a stroke forced him to move in with George in Camden, New Jersey, for 11 years. He then purchased his own house on Mickle Street in Camden where he continued to write poetry and articles until his death in 1892.